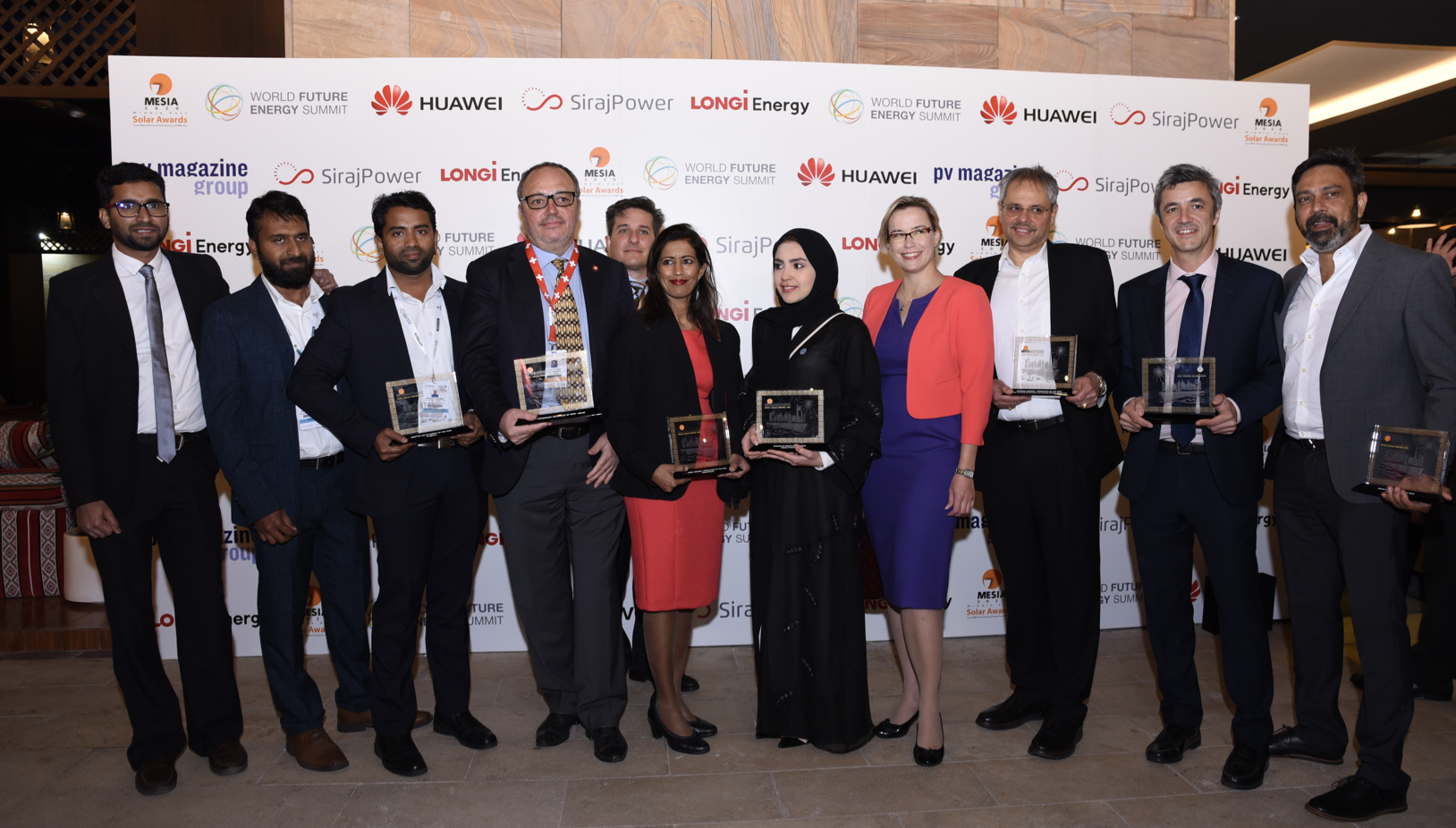 In the welcoming setting of the Aloft Hotel in Abu Dhabi and in partnership with the World Future Energy Summit – Solar 2020, the Middle East Solar Industry Association (MESIA) unveiled the winners of the 2020 Middle East Solar Awards during a gala ceremony on January 15, 2020.

In total, there were 11 trophies in competition across several categories

MESIA focus on industry diversity category of Woman of the Year celebrated the wining of an active member of merger and acquisitions department within the Clean Energy Unit of Masdar, Fatima Al Suwaidi. She has been awarded for her amazing work and leadership in her activityevaluating big portfolio of projects in the USA to increase Masdar presence. The portfolio contains PV, wind and energy storage technologies. She dedicated her effort to enhance Masdar’s visibility worldwide, create value and bring a strong pipe line of projects to Masdar CE.

Entrepreneur of the Year went to Ahmed Aldowsary. Ahmed  has been a Founding Employee for Nomadd Desert Solar Solutions and developing an IP for an Integrated Renewable Bio Reactor System for Industrial Feedstook in areas of energy, pharmaceuticals. He has been the First Saudi Engineer to work on a commercial scale 19 MW solar PV in the World.

Sterling & Wilson came strong this year and took the Utility Project of the Year for its work as EPC at the Noor Abu Dhabi project (1.17GW) which is the world’s largest single location solar PV plant. The project is providing clean energy to 100,000 homes and has been executed in an impressive short timing of 23 months.

MESIA was thrilled to present two companies being ex-aequo for the Industrial Solar Project of the Year award. The local company Clenergize has been recognized for their work in the Emirates Flight Catering Solar Project – 2.785MW.  This solar plant is one of the largest installations on a laundry and food processing site in the world. The 2nd company awarded in this category is the very well-known ENGIE.  They have successfully developed the first corporate power purchase agreement (“PPA”) project in the Middle East: the NADEC solar photovoltaic IPP. This project was launched in July 2018 by one of the largest agricultural and food-processing company in the GCC, to procure electricity from a 30 MWp solar PV facility in NADEC City, KSA.

Again this year we had a very strong competition for the Roof-Top Solar Project of the Year category. The award went to SirajPower for their important project at DP World. Siraj Power has been awarded by global terminal operator at ports to build the region’s largest roof top Solar Energy Project with more than 17,500 solar panels to be installed on rooftops across 110 buildings that will be used as housing/accommodation facilities.

The Regional company of the Year award is usually the category which receives a lot of attention by the Jury. This year the awards went to ACWA Power for their unmatched contribution in the renewable industry, their involvement in the localization efforts and its impact on MENA region. During 2018-19, ACWA Power has constructed seven solar power projects with project cost of 2,700 million USD, delivering an aggregate capacity of 880MW of power in Morocco, Jordan, Egypt and Vietnam.

The Legal Advisor of the Year accolade went once again to Pinsent Masons for their amazing work advising the successful EPC Contractor in the 950MW Concentrated Solar Power (CSP) and Photovoltaic (PV) project procured by DEWA. The 950MW project is the largest hybrid CSP/PV project in the region using a combination of CSP and PV technologies and is extremely significant for Dubai Energy diversification strategy.

MESIA awards would also like to recognise some dynamic and visionary companies. The Best Solar Innovation Award went to Value Addition for its participation in the DEWA R&D Building project located at the Mohammed bin Rashid Al Maktoum Solar Park. The novelty of the project lies in the use of semitransparent glass of varying sizes coming in six different colors. All the four facades and two entrance canopies are covered by these custom made BIPV glasses.

Last but not least, the Solar Energy Picture of the Year went to Rawad  Nasr, energy Engineer at the Lebanese Center for Energy Conservation. He took a wonderful aerial picture of the public rooftop solar PV system overlooking the picturesque and historical bay of Jounieh in Lebanon.

“2019 marked the 10th anniversary of MESIA. The region continues to grow its solar foot print and so is MESIA Awards. This year we received 148 nominations in all 11 categories and this figure shows the commitment and trust of our members in the Award and its impact on producing competition and generating further interest in our industry.  I take the opportunity congratulate all the winners and to thank our distinguished Jury members for their efforts in making 2019 Awards another success to MESIA and the industry.” said Ahmed S. Nada, President of MESIA.