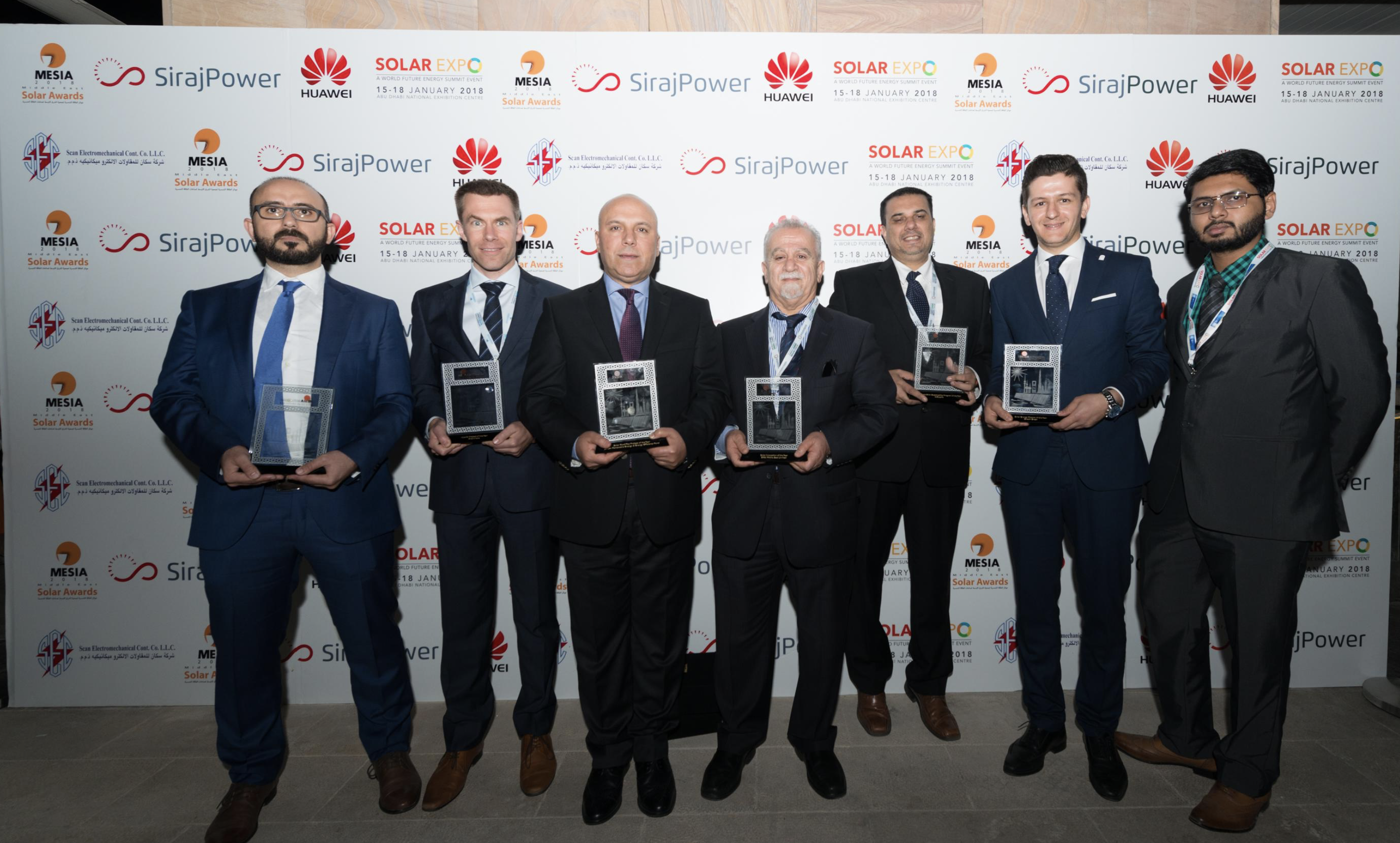 In the welcoming setting of the Aloft Hotel in Abu Dhabi and in partnership with the World Future Energy Summit – Solar Expo 2018, the Middle East Solar Industry Association (MESIA) unveiled the winners of the 2018 Middle East Solar Awards during a gala ceremony on January 17, 2018.

In total, there were 12 trophies that were being contested across several sectors.

The Entrepreneur of the Year accolade went to Bikesh Orga, President & CEO, Renewable Energy Business, Sterling & Wilson. Under his entrepreneurial leadership, Sterling & Wilson has successfully developed a solar portfolio of more than 5 GWp in less than 6 years around the globe.

We were thrilled to award Marubeni with the Large Scale Solar Project of the Year with special mention to JinkoSolar who provided the solar panels for the project. The 1,177MW Sweihan Photovoltaic IPP Project is a 60 % owned by AbuDhabi Water and Electricity Authority and 40% owned by the consortium of Marubeni Corporation and Jinko Solar and is the world’s largest single location Solar PV power plant. The project will also become one of the most cost-effective energy projects in the world, with Japanese Marubeni led consortium offering to provide electricity at the world’s lowest bid at a weighted cost of US 2.42 cents per kWh in September 2016. The consortium achieved Financial Close with mini perm financing in quick 4 months, in May 2017.

MESIA would also like to highlight  some dynamic and visionary companies.  The Hybrid Project of the Year award went to the Enerwhere and its CEO Daniel Zywietz. Enerwhere has installed and is operating one of the largest off-grid solar-hybrid systems in the Middle East at Zaya Nurai’s five stars island resort in Abu Dhabi. The solar plant produces 2,400 MWh/year, saving the resort approximately 1,800,000 AED/year and 5,656 tons of CO2

The Financial Advisor of the Year award went to Synergy Consulting IFA which is one of the leading financial advisors in the solar sector with 19 ongoing / completed deals in 2017 in the MENA region. Among their  landmark transactions are the DEWA Phase III and Egypt FiT programme, Round 2 projects.

Storage project of the Year award went to SMA Middle East Limited with their project located in Bolivia. This PV-Diesel Hybrid project is a 5 MWp PV plant + 2.2 MW Li-ion battery storage. Connected to a 12 MW Genset plant it  consists of 10 individual Gensets serving a local community with residential, commercial and industrial applications.

Another highly contested award was the Solar Innovation of the Year. SMA Limited has been, for the second time, honored for its great and important achievement in term of innovation – the Sunny Tripower CORE1.  This is a 50 KW inverter, the world’s first standing PV inverter optimized for usage with commercial rooftops.

The Solar Value Chain Champion of the Year is Al-Babtain Power & Telecommunication Co. Based in Saudi Arabia, Al-Babtain is a key player in the renewable energy sector, particularly CSP support steel structure components, collaborating with the leading EPCs/Developers. Al-Babtain position themselves as a crucial part of the MENA concentrated solar power (CSP) sector.

MESIA also wanted to highlight the Corporate Solar Sustainability Program of the Year. This award went to K- Electric (KE). The electric utility for the city of Karachi has actively promoted the use of  solar technology to its consumers availing Energy Audit Services and  different consumer galas and business expositions. K-Electric also installed several solar system on its own building.

The Solar Energy Picture of the Year went to a picture representing the Mohammed Bin Rashid Solar Park 1 during sun-set. This amazing picture has been taken by a promising young and talented photographer, Ghadir Schaar.

For the 2nd year and to honor the Solar Expo 2018, jointly with the WFES organizer, we decided to recognize the “most innovative technology on display”. This award went to Huawei. Huawei with 27 years’ experience in the telecommunication world has delivered, in 2016, 22GW of solar PV inverters for utility-scale plants  or rooftop projects, combing PV technology with digital information and internet connections.

It was also crucial to honor and offer a very special award to Hadi Tahboub, MESIA’s previous president. This special award is aimed to recognize his life time achievement in the solar industry. This award was received by Reevian Tahboub, his wife who proudly reminded us about Hadi’s great personality. With a lot of dignity she asked us to remember Hadi Tahboub as a determined, positive and sunny personality.

“Our esteemed members representing all types of solar industry stakeholders and segments have truly engaged and brought further success to the solar industry and to MESIA in the region. This has been demonstrated in the higher number and geographical diversity of the award’s participants, new ideas and quality of projects competing in each category. ” said Ahmed Nada, President of MESIA.

The awards selection was conducted by a panel of 7 judges from around the MENA Region ( Kuwait, Oman, Egypt, UAE and Jordan). They reviewed and evaluated around 70 applications coming from all over the 5 continents.

This annual gala ceremony, organized by MESIA in conjunction with the 2018 WFES, was attended by over 250 dignitaries, government officials and senior business executives from across the world.